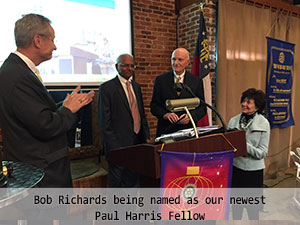 President Jerry called the meeting to order. He announced that March is Rotary Literacy Month, a program that is supported already by our club. The necessity of emphasizing literacy is underscored by the fact that one-third of all entering kindergarten students do not have the basic skills to learn how to read.

Walter Sprouse led the club in the pledge to the flag and the invocation. Richard Harmon introduced the club's visitors and guests. Rick Hall introduced three outstanding Richmond Academy students visiting from the Interact Club.

The incomparable Richard Rogers brought the Sunshine Report. Within a storehouse of other interesting information, he gave a list of the ten jobs that bring the highest satisfaction. Among those were principal, executive chef, loan officer, website developer and systems developer.

President Jerry extended greetings to our new member Brenda Durant, Executive Director of the Augusta Arts Council. He then called on T. R. Reddy to present a Paul Harris Fellow recognition. T.R. introduced his friend Bob Richards. Bob came to Augusta in 1972 and started a highly successful career in the auto dealership business and is equally known for his outstanding citizenship and community service. Congratulations to Bob. 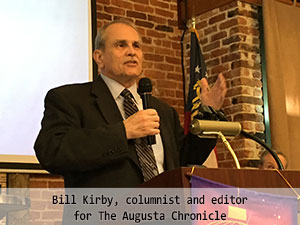 Frank Mulherin then introduced our speaker for the day- Bill Kirby, columnist and editor for The Augusta Chronicle. In his forty years as a journalist, Bill has received over two hundred awards for his work in writing and editing. He remarked that it has been twenty-five years since he last spoke to our club and wondered if there was any significance to that.

Bill's topic was Augusta Journalism in the Twentieth Century. It was a marvelous walk down memory lane as he showed pictures and talked about the highlights of significant community leaders who either worked their entire careers as journalists or got their start in the field. Some of the people he mentioned and spoke about were:


President Jerry then adjourned the meeting by leading all in the recitation of the Four-Way Test.

While in-person lunch meetings have transitioned to Zoom, the Rotary Club of Augusta has been partnering with Fat Man’s Café since April to provide meals to the healthcare workers each week.