President Jerry Rogers opened the meeting and called on Walter Sprouse who led the pledge and invocation. President Jerry called on the club to recognize the passing of our friend and long time Rotarian Hugh Greene. Dave Brendza introduced the guests and visiting Rotarians. Brad Means gave the Sunshine Report and shared some "immature" but hilarious humor with the club. Brad also reminded the club that Jeff Spears lost his mother last week and asked us to keep the Spears and Greene families in our thoughts and prayers.

Three club members were recognized for their achievement in being named among America's Best Attorneys: George Hall, Neal Dickert, and David Hudson were all recognized and congratulated.

President made the following announcements & presentations:
We were updated on the opportunity for students to travel to Oslo Norway for six weeks. Club members were asked to encourage participation from non-married students 20-24 years of age. This thankfully excludes Jeff Futrelle from being our chosen representative!
Member's Moment: Mieko Di Sano shared about her position at the Augusta Symphony. Mieko serves as administrator, fundraiser, financial manager and booster. Previously she was a professional French Horn player. Mieko also updated us on the progress of the Miller Theatre and on upcoming concerts.

Guest Speaker: GRU's Men's Golf Coach, Jack O'Keefe was introduced by Marc Miller. Marc gave us a brief summary of Jack's background. Jack came to GRU from Ole Miss, played at the U. of Arkansas and professionally in the PGA. He has been married to Susan for 16 years and they are the proud parents of four children. Coach O'Keefe asked a series of Trivia questions and then opened the floor for questions. Club member questions elicited interesting answers: We learned that the coach generally takes 5 golfers to tournaments and has five in reserve at home, the top three qualify by score, the coach then picks the fourth and fifth players. The team plays in five tournaments in the fall and five in the spring. Recruiting continues to insure that GRU has the best talent. Coach O'Keefe studies players closely throughout their careers and responds to students who contact him, however, he is forbidden from initiating contact until September 1 of the sophomore year. Jack shared that our facilities rank in the top 20 nationally and in the top 4 or 5 in the SEC.

We learned he's working to get GRU in to the NCAA and his goal for GRU is to be ranked in the top 25 and ultimately to win another National Championship.

Next week's speaker will be our Georgia Rotary Student Aline Lemis who will speak on her home nation Brazil. After Aline's talk we will reconvene next door for the unveiling of our 100th Anniversary project.

The meeting was adjourned following the recital of the Four-Way Test. 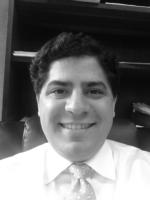 Moved south to metro-Atlanta during elementary school, where he grew up in Duluth, Georgia, and attended Duluth High School, graduating with honors.

Thereafter he practiced with a large Atlanta law firm, concentrating on commercial litigation.

Since July 2013, he has served as an in-house attorney for Georgia Regents University, advising university personnel on a large variety of legal matters.

He attends St. Mary on the Hill Catholic church, and has enjoyed serving as a citizen panel volunteer for the United Way of the CSRA in which panel members visit various local charities and asses continued United Way funding for those charities.

In his free time, he enjoys golf, traveling when possible, and spending time with girlfriend, Tara.

The following will receive a make up for attending the Red Badge Orientation Meeting on September 9, 2014

While in-person lunch meetings have transitioned to Zoom, the Rotary Club of Augusta has been partnering with Fat Man’s Café since April to provide meals to the healthcare workers each week.